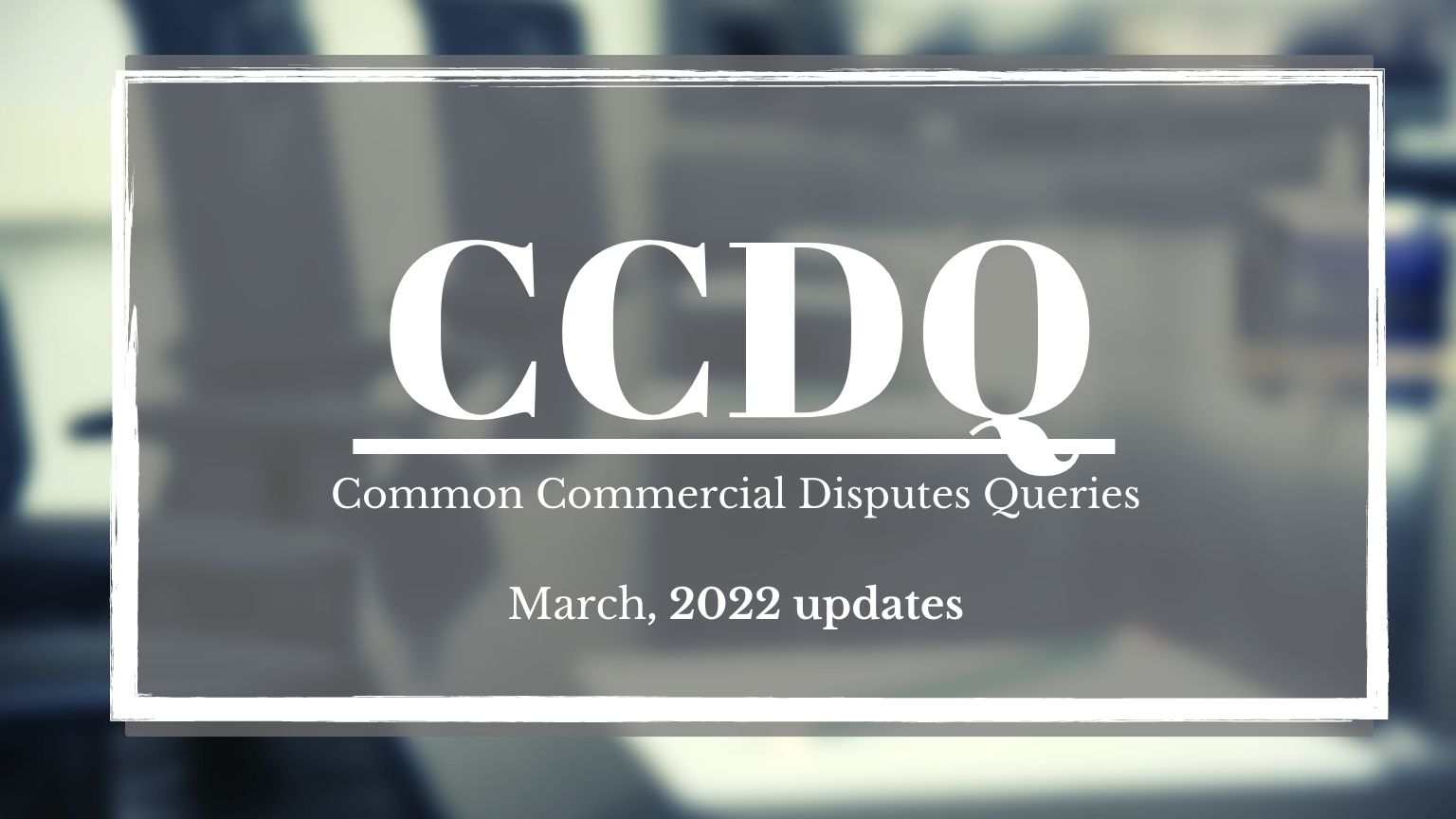 Can Arbitration under the Indian Telegraph Act, 1885 oust the jurisdiction of Consumer Courts?

In the case of Vodafone Idea Cellular Ltd. Vs. Ajay Kumar Agarwal (#SupremeCourtofIndia, 3 Judge bench, decided on 16.02.2022), the Respondent had instituted a consumer complaint before the District Consumer Disputes Redressal Forum, Ahmedabad, alleging deficiency of service on the part of the Appellant, due to an alleged over-charge by the Appellant through the “auto-pay” system of the Respondent’s credit card.

The Question which arose was, whether Section 7B of Indian Telegraph Act, 1885 providing for statutory arbitration ousts the jurisdiction of the consumer forum in deciding a dispute between a telecom company & a consumer.

In view of the above, It was held that the consumer forum had jurisdiction despite the statutory remedy of arbitration under the Telegraph Act. The consumer had a choice between the two options, and the consumer’s choice was valid.

In the case of Parthasarathy vs. E Springs Avenues Pvt. Ltd. (#SupremeCourtofIndia , decided on 18.02.2022), the High Court, under Section 37 of the #Arbitration & Conciliation Act, 1996 had set aside the award passed by the #arbitrator and remanded the matter back to the arbitrator for a fresh decision.

In view of the above law, the Supreme Court quashed the judgment of the High Court, and directed the High Court to consider the appeals on merits.

Can a Court remand the matter back to the same Arbitrator under a Section 34 Petition or a Section 37 Appeal? PART 2

In the case of Mutha Construction v. Strategic Brand Solutions (#SupremeCourtofIndia , decided on 04.02.2022), the High Court single judge had, in a Petition under Section 34, set aside the award and remanded the matter to the Sole Arbitrator to pass a fresh award. This was done by way of a consent order.

Thereafter the Petitioner moved an application seeking modification of the order submitting that there was no consent which had been accorded for the same. However, the said application was rejected by the Single Judge.

Thereafter against this order of rejection, the Petitioner moved an appeal to the Division Bench, which was later withdrawn, and then moved a review before the same single judge.

The said review petition was also rejected stating that the original order had been passed by consent.

Against the said orders the Petitioner filed a Special Leave Petition before the Supreme Court.

In view of the above the Supreme Court upheld the order of the High Court & the SLP was dismissed.

Can a party be allowed to appoint an Arbitrator AFTER a Section 11 Petition for Appointment has already been filed?

It was against this order of dismissal that Durga then approached the Supreme Court.

On the basis of above, the appeal was dismissed.

Can Damages be granted in lieu of specific performance?

UNIVERSAL PETRO-CHEMICALS LTD. v. B.P. PLC (#SupremeCourtofIndia decided on 23.02.2022), was an SLP arising from an order passed in an appeal by the Division Bench of High Court (“DB”).

The main submission of the Appellant before the Supreme Court was that when the case was filed in 2008, at that point specific performance could have been granted, but now since the agreements stood expired through efflux of time, damages in lieu thereof should be awarded in terms of Section 21(5) of the Specific Relief Act.

The Supreme Court observed, regarding the claim of compensation as follows:

In view thereof, it was held that the Appellant was not entitled to a claim for damages, & the SLP was dismissed.

Can you file a jurisdictional objection in an Enforcement Proceedings for a Foreign Award and then later file a complete objections?

In the case of TAQA India Power Ventures Private Limited & And v. NCC Infrastructure Holdings Limited (#DelhiHighCourt, decided on 01.02.2022), TAQA had filed a Petition under Section 48 of the #Arbitration & Conciliation Act, 1996 (enforcement of a foreign award) in the year 2018, and NCC had limited its objections only on the ground of territorial jurisdiction of the Court.

When the arguments before the Court finished, at the end of arguments, the Respondent submitted that incase the Court decides that TAQA’s petition is maintainable, NCC should be given an opportunity to file its objections on merits.

The Court here observed the following, with regard to the said request by NCC:

In view of the above the Court found that there was no ground to grant further time to NCC to file objections on merits.

Despite the above observations, in interest of justice, NCC was allowed an additional opportunity to file its objections regarding enforcement of the award on depositing costs with the Delhi High Court Legal Services Committee.

Can you Overcome Statute Prescribed Limitation in a Statutory Arbitration with the help of Limitation Act?

Bihar Industrial Area Development Authority & Ors. Vs. Rama Kant Singh (#SupremeCourtofIndia, decided on 15.03.2022 ), was a case where the arbitration had been undertaken under the Bihar Public Works Contracts Disputes Arbitration Tribunal Act, 2008 (“2008 Act”).

One of the contentions raised before the Arbitral Tribunal (AT) constituted under the 2008 Act for the disputes between the parties was that the disputes raised by the Respondent were barred by limitation as the act provided a 1 year period for referring disputes to arbitration.

In this regard, the AT held that by the applicability of Article 137 of the Limitation Act, 1963 (residual provision providing for 3 year limitation from the date when right to apply accrues) the reference was not limitation barred.

In view of the above, the award was not interfered with in principle. However, since there was a large delay of 21 months by the Respondent in approaching the AT the interest granted under the award was modified.

Does Section 22 of the Limitation Act, apply to proceedings under the IBC?

In Intec Capital Limited vs. RATCHET LABORATORIES LIMITED (NCLT, New Delhi, decided on 14.03.2022), Intec had filed an application under Section 7 of the #Insolvency & #Bankruptcy Code (IBC) to trigger the Corporate Insolvency Resolution Process (CIRP) against Ratchet.

An arbitration proceeding and a proceeding under Section 138 (cheque bouncing) of the Negotiable Instruments Act was also initiated by Intec against Ratchett.

On limitation, Intec had submitted:

Regarding limitation, the Court observed as follows:

In view of the above, the application was rejected as being barred by limitation.

The case of Prasanna v. Union of India (Bombay High Court, Division Bench, decided on 17.03.2022), was a Writ Petition seeking restoration of the Distribution Agency after setting aside of the termination letter sent by UOI.

One of the key objections raised by UOI was that since the Distributor Agreement contained an #arbitration clause, all disputes including the reliefs sought by the Petitioner were to be referred to arbitration, and the writ Petition was not maintainable. This was especially because there was no allegation of breach of principles of natural justice by UOI in termination.

Petitioner on the other hand submitted, that such a relief would be beyond the scope of arbitration.

In view of the above, the writ Petition was not entertained on merits, and Rule was discharged. The interim order staying the termination was continued for a period of four weeks, providing ample opportunity to the Petitioner to approach the arbitrator.

In the case of Foomill Private Limited v. Affie (India) Limited (Delhi High Court, decided on 25.03.2022), Foomill had filed an Application for Appointment of an #Arbitrator under Section 11 of the #Arbitration & Conciliation Act, 1996.

The Arbitration Clause in the Agreement was as follows:

The Court observed regarding the arbitration clause as follows:

In view of the above, it was held that the above clause cannot be construed as an arbitration clause by mere use of the word “arbitration” in the heading.