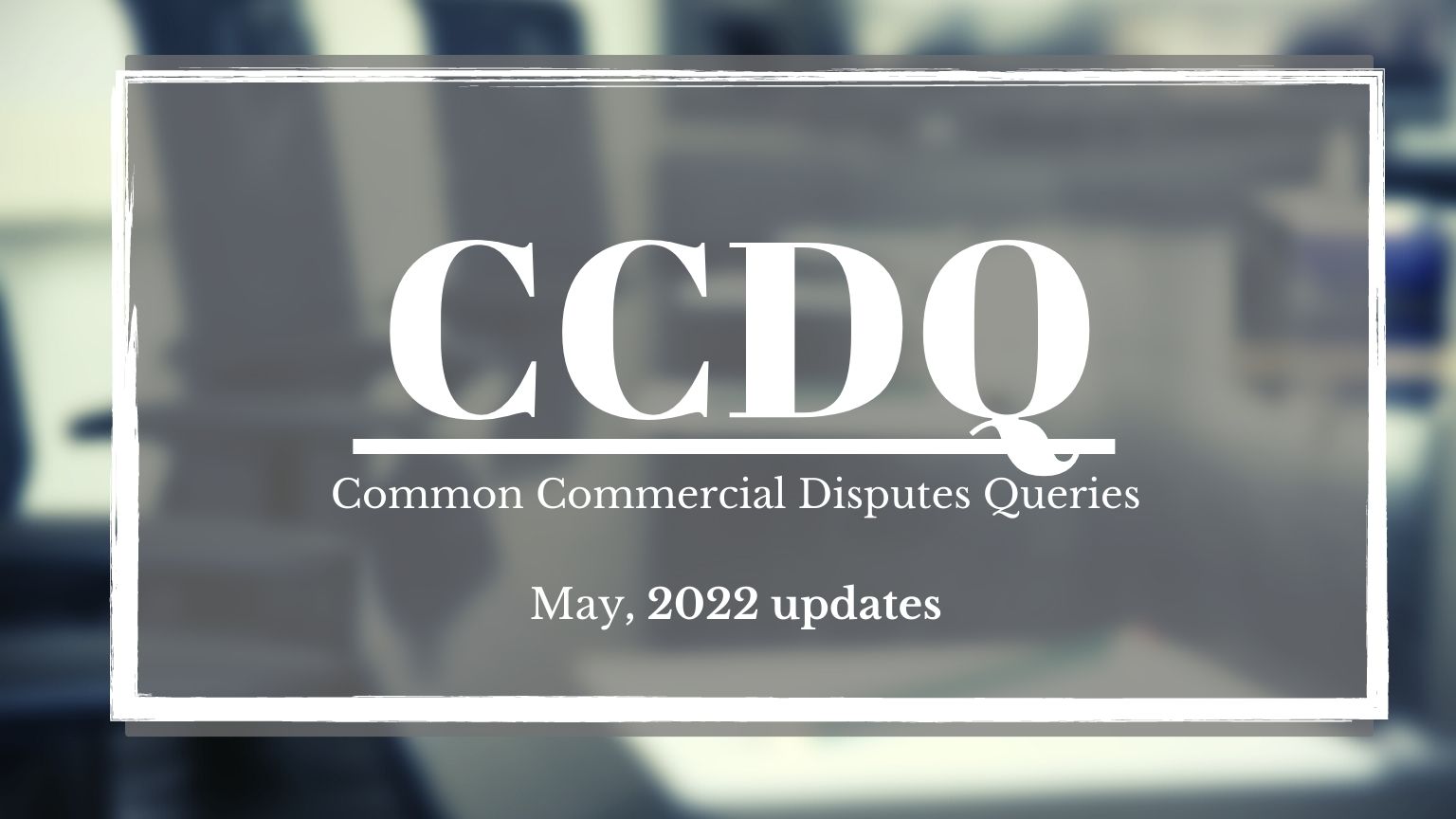 In Oil and Natural Gas Corporation Ltd. vs Discovery Enterprises Pvt. Ltd (DEPL), (#SupremeCourtofIndia, three judge bench, decided on 27.04.2022), the Supreme Court (SC) explained, and revisited the concept of the Group of companies doctrine to bind non-signatories to an arbitration agreement.

In this case, ONGC had a contract with DEPL, which is a company belonging to DP Jindal Group.

ONGC had attempted to join Jindal Drilling and Industries Limited (JDIL) to the arbitration proceedings. ONGC had also moved an application for discovery and inspection of documents to prove the necessity of such a joinder. However, the Arbitral Tribunal (AT) had passed an interim award refusing the joinder, without deciding the said application, substantially on the fact that JDIL was not a party to the contract.

The interim award was under challenge, and the SC made the following observations:

In the case of Narinder Garg & Others v. Kotak Mahindra Bank (#SupremeCourtofIndia, three judge bench decided on 28.03.2022), a Writ Petition had been filed seeking to quash Criminal Complaints under Section 138 of the Negotiable instruments Act, 1881 (Cheque Bouncing), which were filed against the Petitioner Company and its Directors. The quashing was sought in view of NCLT, Chandigarh’s order of moratorium.

The Petitioners alleged that once the resolution plan was accepted and approved in which the dues of the complainant(Respondent) also figured, the effect of such an acceptance would be to obliterate any pending trial under Sections 138 and 141 of the Negotiable Instruments Act.

In view of the same, the Writ Petition was dismissed.

In the case of Ircon International Ltd. (Govt. of India Undertaking) v. GPT-Rahee JV (Delhi High Court, decided on 25.03.2022), the parties had entered into two contracts, one for Fabrication & one for Erection, of steel girders for Rail-Road bridge across river Ganga at Patna.

Owing to various delays in the project, the Contracts were extended for a period of more than 3 years from the original stipulated date of completion and the Respondent invoked arbitration to pursue its claims.

One of the questions which had fallen for consideration before the Arbitral Tribunal (AT) was whether the Respondent had furnished the No Claims Certificate (NCC) under duress or voluntarily.

The Award was challenged under an objection petition under section 34 of the #arbitration & conciliation Act, 1996.

The Court while perusing the evidence relied upon by the Arbitral Tribunal, had observed as follows:

In view of the same the Court observed that there was no “Patent Illegality” or “public policy” violation in the AT’s award, as the Court could not re-appreciate the evidence. Further the Arbitrator’s views were a plausible one, and could not be interfered with.

Therefore the award was upheld and the Petition dismissed.

In the case of Cox & Kings Limited v. SAP India Private Limited, (#SupremeCourtofIndia, three judge bench, decided on 06.05.2022), the Court noted that there were some inherent contradictions in the current state of Group Companies Doctrine in India. These are owing to the following reasons:

All of the above judgments were mostly three judge bench, and some are two judge bench.

In view of the above discussion and also considering the importance and growth of the doctrine in the India Context, the Supreme Court of India has referred following questions to larger bench:

In the case of M/S Garg Builders vs Hindustan Prefab Ltd. (Delhi High Court, decided on 02.05.2022), the Petitioner, as a part of the construction agreements entered between parties, was required to submit Bank Guarantees towards Security Deposit and Performance.

As disputes arose between the parties, the Respondent invoked the Bank Guarantees by writing a letter to the Bank, and the Petitioner in turn approached the High Court under Section 9 of the #Arbitration & Conciliation Act, 1996 seeking a stay on the invocation of the Bank Guarantees.

In view of the above, the Petition was dismissed.

The Court while discussing the rival assertions observed:

“This is yet another a case in which valuable time of this Court has been expended in dealing with a prayer for a restraint against invocation of “unconditional” and irrevocable bank guarantees… despite the law in that regard being practically fossilized, Courts were being inundated with repeated requests for stay of unconditional bank guarantees.”

In the case of Union of India v. Indian Agro Marketing Cooperative Limited (Delhi High Court, decided on 02.05.2022), the #Arbitrator had terminated the Arbitral proceedings before her.

The said termination was in exercise of Arbitrator’s jurisdiction under Section 25(a) of the #Arbitration & Conciliation Act, 1996, on the ground of the Petitioner’s defaults in filing Statement of Claim, despite repeated opportunities having been granted for the same.

The Petitioner had, before approaching court, also filed applications before the Arbitrator for recall of the said orders, but no order was passed on the said recall application.

In view of the above, the High Court disposed off the Writ Petitions with a direction to the arbitrator to consider and to take a decision on the Petitioner’s recall applications seeking recall of arbitrator’s order terminating the proceedings.

In Swadesh Kumar Agarwal v. Dinesh Kumar Agarwal (#SupremeCourtofIndia, decided on 05.05.2022), there was no written agreement between the parties, & arbitrator was appointed by mutual consent of parties for resolution of disputes.

Here, the sole #arbitrator was allegedly unduly delaying the disputes, owing to which Respondent approached High Court (HC) under S. 14 of #Arbitration & Conciliation Act, 1996 (A&C Act). The Appellant had in the said petition, filed an Order VII Rule 11 application, for rejection of the S. 14 application which was dismissed by HC. Even the Writ Petition filed against this dismissal was dismissed. It was against the Order of dismissal of the Writ Petition that the Appellant had approached the Supreme Court.

Further, once the S. 11(6) application was decided, the Respondent had withdrawn its S. 14 application which had been pending before the HC.

The Court while observing and being mindful of the facts of the case observed as under:

In view of the above observations, HC’s order passed under S. 11(6) was quashed & set aside, S. 14 application was directed to be revived, & be decided in accordance with law.

In the case of Millennium School v. Pawan Dawar (Delhi High Court, decided on 10.05.2022), the parties had entered into agreement whereby the Respondent was to provide transport services to the Petitioner school.

Disputes arose between the parties, when the Respondent had outstanding payments owed from the Petitioner, the petitioner alleged deficiency of services and terminated the Agreement.

When the disputes were referred to the #arbitrator, the Arbitrator allowed one of the Claims of the Respondent, on the ground that the Petitioner failed to prove deficiency of services.

The Petitioner had brought on record several emails to prove deficiency of services, but the Arbitral Tribunal had rejected all of these on the ground that the requirements under Section 65-B of the Evidence Act were not complied with. Although a certificate under Section 65-B was filed by the Petitioner, the Arbitral Tribunal held it was defective.

The Court’s observations were as follows

In view of the above, because loss of profit was solely awarded on the basis that the termination of the Agreement was illegal, the said award of loss of profits was set aside.

These are two helpful flowcharts prepared from a reading of Sections 2, 15 and 16 of the Micro, Small and Medium Enterprises Development Act, 2006 (#MSME Act).

They describe the following:

The MSME Act provides for statutory conciliation & Arbitration and also a high rate of interest where payments are not made on time.

“Appointed Date” means the day following immediately after the expiry of the period of fifteen days from the day of acceptance or the day of deemed acceptance of any goods or any services.

In the case of Rajesh Gupta v. Ram Avtar (Delhi HC, decided on 19.05.2022), parties had entered into an Agreement for purchase of Respondent’s factory by Petitioner.

Petitioner had already paid a large sum of 37.5% of the entire purchase price as “Earnest Money” (EM).

The Agreement provided that incase the Petitioner failed to complete the transaction within stipulated time, then the Respondent would be entitled to recovery double the amount of the EM paid.

These disputes, when they came before the #Arbitrator, he did not allow refund of EM & permitted forfeiture of EM, citing terms of Agreement.

This award came to be challenged before Court in an objection petition under Section 34 of the #Arbitration & Conciliation Act, 1996, & regarding EM forfeiture, the Court observed as follows:

In view of the above, the Court observed that it would be impermissible for the Respondent to forfeit the EM & the award was set aside.

In the case of Board of Trustees for Syama Prasad Mookerjee Port v. Marinecraft Engineers Private Limited (Calcutta High Court, decided on 17.05.2022), the Respondent was registered under the Micro Small and Medium Enterprises (“MSME”) Development Act, 2006 (“MSME Act”).

In this case, the Respondent had invoked disputes before the MSEFC (MSME Facilitation Council) for conciliation. Once the conciliation had failed, the disputes were referred to arbitration.

In the #Arbitration proceedings, the Petitioner challenged the jurisdiction of the arbitrator, whereby the arbitrator rejected the said application.

The Petitioner then challenged this order of the arbitrator before the High Court under Section 34 of the #Arbitration & Conciliation Act, alleging that the said order amounted to an interim award.

In view of the above, the objection petition was dismissed.