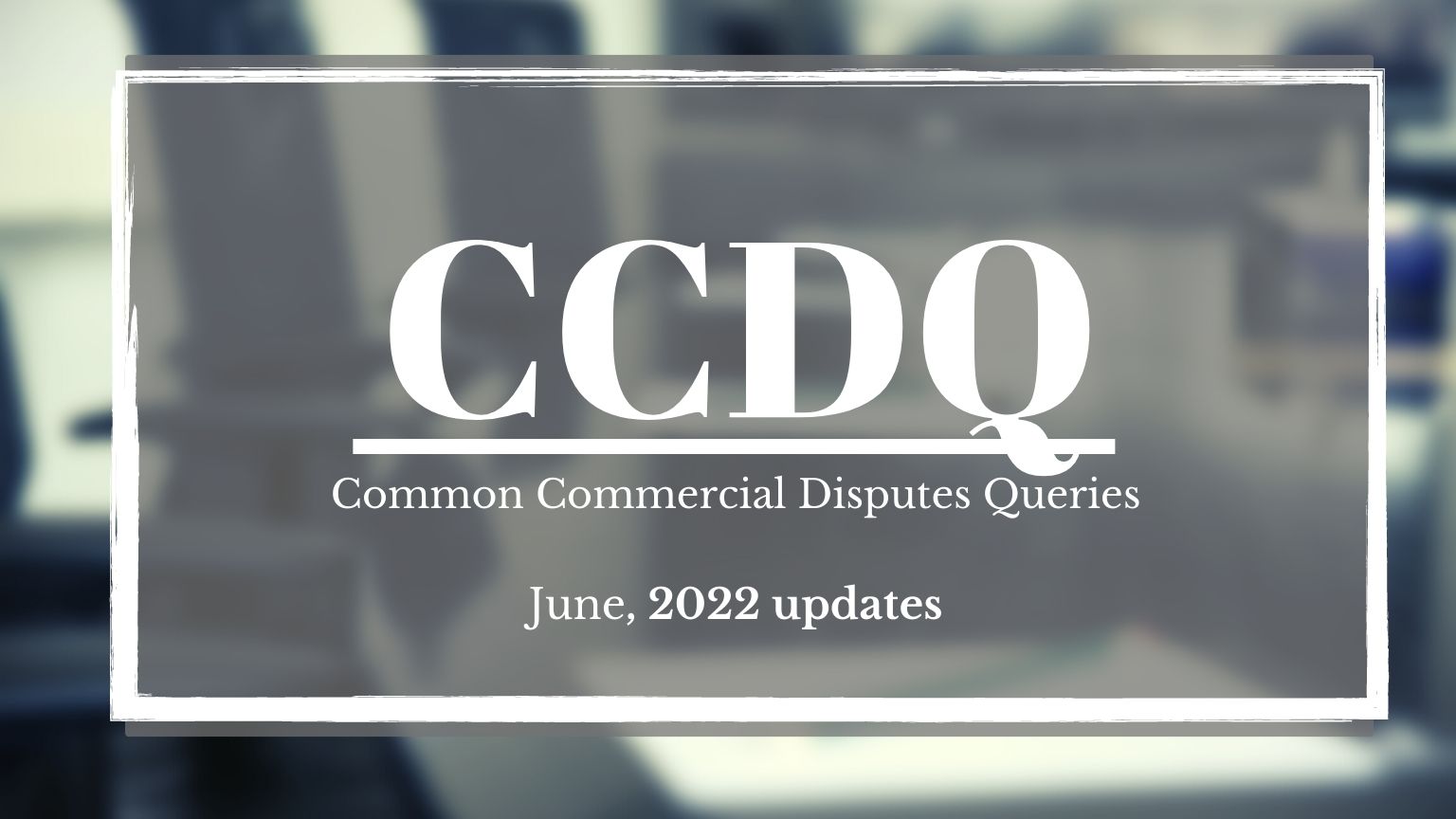 Questions Answered in this Month’s CCDQ

In the case of Himanshu Shekhar v. Prabhat Shekhar, a dispute which arose between between two brothers, was consensually referred to #arbitration, and one of the brothers had challenged the jurisdiction of the #arbitrator on the ground of automatic disqualification being a related party.

The Seventh Schedule of the Arbitration & Conciliation Act, 1996(“A&C Act”) contains entries which are per se disqualifications for an arbitrator. Entry number 9 of the seventh schedule in particular provides:

“9. The arbitrator has a close family relationship with one of the parties and in the case of companies with the persons in the management and controlling the company.”

In light of the above, the Court held that it was unnecessary to decide the question of waiver in terms of Section 12(5) of the A&C Act as the arbitrator’s qualifications did not fall within the seventh schedule. The Petition was therefore dismissed.

Puneet Kaur v. KV Developers & Ors (NCLAT, decided on 01.06.2022), was a case where 5 appeals had been filed by Homebuyers against the builder/ Corporate Debtor (“CD”).

The Home buyers had filed their claims after a delay of eight months from the cut-off date advertised by the Resolution Professional, & since, the Resolution Plan had already been approved, the claims were rejected.

These Home buyers had approached the NCLAT against the rejection of their claims by NCLT.

The NCLAT observed as follows:

Section 11(13) of the Arbitration & Conciliation Act, 1996 provides that an application for appointment of arbitrator(s) shall be disposed off expeditiously and an endeavour shall be made to dispose off the matter within SIXTY DAYS from date of service of notice to the opposite party.

Despite such a clear provision, I have seen delays of more than 3 years in different High Courts.

Fortunately, recently this issue has come to the notice of the Supreme Court of India in M/s Shree Vishnu Constructions Versus The Engineer in Chief, Military Engineering Service & Ors (Order passed on 19.05.022), who has made the following observation:

“ It is seen that numbers of applications under Sections 11(5) and 11(6) of the Arbitration Act are pending since more than one year. In many High Courts, applications for appointment of the arbitrator(s) are pending for more than four to five years.

Hopefully this will provide some relief, and bridge the “slip between the cup and the lip”.

In Ocean Sparkle Limited v. Oil and Natural Gas Corporation Ltd (Bombay High Court, decided on 06.06.2022) ONGC had hired a vessel of the Petitioner to perform its offshore activities as per an Agreement between the parties, under which the Petitioner had also issued a Bank Guarantee in favour of ONGC.

Here, the contract stood performed completely, & ONGC had not disputed the performance of the contract. However, ONGC had made a claim of damages for an incident of collision of vessels, and was not releasing the payment of Petitioner’s agreed invoices due to this “counterclaim”.

Here the Petitioner had filed a Petition under Section 9 of the #Arbitration & Conciliation Act, 1996, & sought various reliefs from the Court, which were as follows:

The relevant term of the Bank Guarantee was as follows:

“5. The Bank further agrees that the Guarantee herein contained shall remain in full force during the period that is taken for the performance of the CONTRACT and all dues of ONGC under or by virtue of this CONTRACT have been fully paid and its claim satisfied or discharged or till ONGC discharges this guarantee in writing, whichever is earlier.”

On the above terms the Petition was disposed off.

I have several Qualms which the judgment which are contained as hereunder:

In the case of M/s BPR Infrastructure Limited versus M/s. Rites Limited – Government Of India Enterprise. and Anr. (Telangana High Court, decided on 08.06.2022), an application under Section 11(6) of the #Arbitration & Conciliation Act, 1996 had been filed for appointment of arbitrator.

in this case, when the Applicant had sought its payments from the Respondent, the Respondent had stated that payments under the Final Bill would not be released unless the applicant furnished a No Claim Certificate (NCC).

Thereafter when the Applicant agitated its remaining claims, the Respondent cited the NCC. Owing to this denial disputes arose between the parties.

Clause 25 of the Contract is relevant which was as follows:

The court was faced with the dilemma of whether the arbitrator can deal with the question of the NCC being issued under fraud or coercion.

In view of the above, the Court appointed the arbitrator keeping all contentions open, including the effect of the NCC.

In the case of A-One realtors Pvt. Ltd. v. Energy Efficiency Services Ltd. (Delhi High Court, Decided on 23.05.2022), the Plaintiff had filed a suit, in response to which the Defendant filed an application under Section 8 of the #Arbitration & Conciliation Act, 1996(A&C Act) (for reference of disputes to arbitration due to existence of arbitration clause).

Pursuant to filing the application the court referred the parties to arbitration.

Thereafter the Plaintiff applied to Court to get a refund of is court fee deposited in the suit, citing section16 of the Court Fees Act, 1870 and Section 89 of the Code of Civil Procedure, 1908 (CPC).

The relevant portions of the sections are reproduced below:

“16. Refund of fee.—Where the Court refers the parties to the suit to any one of the mode of settlement of dispute referred to in section 89 of the Code of Civil Procedure, 1908 (5 of 1908), the plaintiff shall be entitled to a certificate from the Court authorising him to receive back from the collector, the full amount of the fee paid in respect of such plaint.”

Regarding the entitlement of the Plaintiff for refund of Court fee, the Court observed as follows:

In view of the above, the application for refund of Court fee was rejected.

My two cents: invoking a wrong remedy can cost parties dearly even if the Indian law doesn’t penalize parties(or advocates) in costs for the same as such.