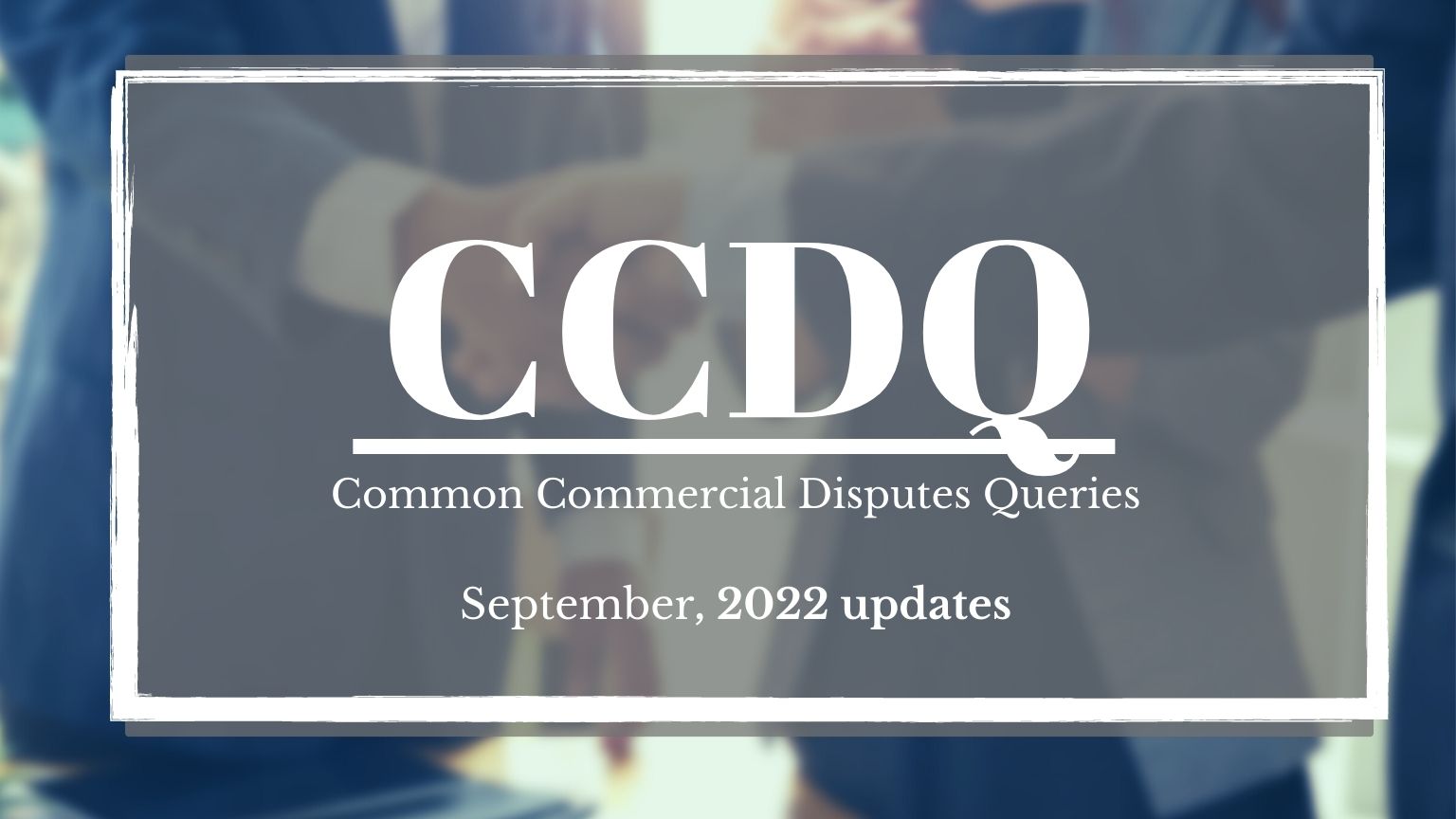 In the case of ONGC v. Afcons Gunanusa JV (#SupremeCourtofIndia, three judge bench, decided on 30.08.2022), the Arbitrators sent out a procedural order fixing its fee as Rs. 1.5 Lakh per arbitrator per sitting, along with an additional reading fee or conference fee. On receiving such a fee, ONGC resisted it before the Arbitrators asking them to restrict their fee as per the fourth schedule to a cap of INR 30 lacs, albeit unsuccessfully.

Upon being unsuccessful, ONGC then filed a petition under Section 14 read with Section 15 of the #arbitration & conciliation Act, 1996 before the Bombay High Court, which was also dismissed, after which ONGC approached the Supreme Court of India.

Similar facts had given rise to the present appeal in three other matters which were being heard collectively before the Supreme Court.

The Supreme Court had the following issues before it:

The Supreme Court then held as follows:

In the case of Yashovardhan Sinha HUF v. Satyatej Vyapaar Pvt. Ltd. (Calcutta High Court, decided on 24.08.2022), the parties had entered into a loan agreement, which contained an arbitration clause.

The relevant portion of the #arbitration clause is as hereunder:

“19. Any disputes or differences between the parties arising out of or in relation to or in connection with or in anyway related to this Agreement or in relation to dealings and transactions under this Agreement shall be referred to the sole arbitration of a person to be nominated by Lender and the arbitration proceedings shall be governed by the Arbitration and Conciliation Act, 1996. The Borrower and/or the Guarantor shall not be entitled to have any objection regarding the personnel of the Sole Arbitrator for the reasons that he may be an associate or advisor of Lender or connected or related to Lender and/or its directors or executives on personal, business or professional basis……”

Effect must be given to the arbitration clause sans the illegal portion.

In light of the above discourse, the Court went on to substitute the arbitrator under the Section 11 Petition being heard before it and disposed off the Petition accordingly.

In the case of National Highway Authority Of IndiaÊ(Nhai) vs. Additional Commissioner, Nagpur & Ors. (Bombay High Court, decided on 20.08.2022), NHAI had initially filed an objection petition under Section 34 of the #arbitration & Conciliation Act, 1996 before the Principal District Judge, Nagpur.

The section 34 petition filed by NHAI was partly allowed in its favour in as much as the arbitrator had failed to appreciate that the Respondents had not placed any evidence regarding difficulty in developing the land.

Against the section 34 order of the Principal District Judge NHAI had approached the Supreme Court on the ground that the Principal District Judge had committed a grave error in law in “partly” setting aside the Award, as an Award could only be set aside in entirety with arbitration afresh and no part setting aside could be ordered under Section 34. NHAI’s pleas were based on the law laid down by various Supreme Court judgments where modification of the award is not permitted under Section 34, and according to NHAI part setting aside amounted to modification of an award.

Accordingly, the Appeal was set aside.

In MORGAN SECURITIES AND CREDITS PRIVATE LIMITED Pvt. Ltd. v. Videocon Industries Ltd. (#SupremeCourtofIndia, decided on 01.09.2022), the issue raised was whether the arbitrator has the discretion to grant post-award interest only on the principal sum due Under Section 31(7)(b) of the #Arbitration & Conciliation Act, and not the combined sum of principal and pre-award interest.

The main contention raised, on which the Supreme Court had admitted the SLP was that the arbitrator had erred in granting post award interest on the principal sum alone based on State of Haryana v. SL Arora(2010) 3 SCC 690 (“SL Arora”), when this decision had already been overruled in Hyder Consulting (UK) Ltd. v. State of Orissa 2013) 2 SCC 719 (“Hyder Consulting”)

The Supreme Court observed as under:

Thus, there was no error apparent in the award and the SLP was dismissed.

In Shree Enterprises Coal Sales Private Limited v. Union of India (#SupremeCourtofIndia, decided on 12.09.2022) this was the question which had arisen before the Supreme Court.

Here Shree Enterprises had purchased coal from Northern Coal Fields Limited (“NCFL”) through an e-auction, upon which NCFL had charged a concessional tax rate of 2 percent. Disputes arose between the parties when NCFL failed to issue the relevant form, and also failed to grant benefit of form C while charging a tax rate of 4 percent.

Consequent to this Shree Enterprises filed a writ Petition before the Allahabad high court seeking relief. One of the grounds on which the Writ Petition was dismissed was that the terms of the e-auction provided for an arbitration clause and therefore all disputes should have been referred to #arbitration.

In the appeal before the Supreme Court on this issue, the Court observed as follows:

In view of the same, the matter was remanded back to the High Court with a direction to dispose the matter expeditiously.

In this case Essar House Private Limited (“EH”) had entered into a Rental Agreement with Essar Steel (“ES”) in which a portion of the Essar House was let out to ES.

In 2017 the Corporate Insolvency Resolution Process was started against ES. Arcellor Mittal (“AM”) submitted a resolution plan in respect of ES which was approved in 2019.

Here disputes arose between EH & AM when AM sought refund of security deposit under the rental agreement, which EH claimed had already been adjusted against some loans.

Subsequently AM approached court U/S 9 of the #Arbitration & Conciliation Act, 1996 seeking deposit of the security deposit amount. This resulted in a series of appeals being filed, the final one being a S. 37 Appeal before the Division Bench of Bombay HC.

Consequently appeal was filed by EH before SC, against Bombay HC’s DB order. The main contention raised by EH was that while deciding a S. 9 application even under the Arbitration Act, the principles of the Code of Civil Procedure Act, 1906 (“CPC”) are to be strictly followed.

In view of the above, it was held that the order of the Division Bench suffered from no infirmity & the Appeal was dismissed.

Here the Builder & the Appellant had entered into a development agreement, which required the builder to construct apartments on the Appellants’ land whithin 15 months’ time.

Disputes arose between the parties when the development of the plot was delayed.

The dispute resolution clause in the development agreement read as under:

“18. All the disputes or differences arising between the parties hereto as to the interpretation of this Agreement or any covenants or conditions thereof or as to the rights, duties, or liabilities of any part hereunder or as to any act, matter, or thing arising out of or relating to or under this Agreement (even though the Agreement may have been terminated), the same shall be referred to arbitration of a Sole Arbitrator mutually appointed, failing which, two Arbitrators, one to be appointed by each party to dispute or difference & these two Arbitrators will appoint a third Arbitrator & the Arbitration shall be governed by the Arbitration & Conciliation Act, 1996 or any re-enactment thereof.”

When the Appellant invoked the High Court for appointment of #arbitrator U/s 11 of the #Arbitration & Conciliation Act, 1996(“Act”), the High Court dismissed the application stating that the dispute resolution clause lacked the essential ingredients of an arbitration agreement, as it did not mandate that the decision of the arbitrator would be final & binding on the parties.

The Supreme Court while discussing the validity of the clause, observed as below:

In view of the above, the Court held that the arbitration clause was valid & the appeal was allowed.

This judgment also reiterated the important ingredients of a valid arbitration clause as laid down in K.K.Modi v. K.N.Modi (1998)3SCC573

“17. Among the attributes which must be present for an agreement to be considered as an arbitration agreement are:

(1) The arbitration agreement must contemplate that the decision of the tribunal will be binding on the parties to the agreement,

(2) that the jurisdiction of the tribunal to decide the rights of parties must derive either from the consent of the parties or from an order of the court or from a statute, the terms of which make it clear that the process is to be an arbitration,

(3) the agreement must contemplate that substantive rights of parties will be determined by the agreed tribunal,

(4) that the tribunal will determine the rights of the parties in an impartial and judicial manner with the tribunal owing an equal obligation of fairness towards both sides,

(5) that the agreement of the parties to refer their disputes to the decision of the tribunal must be intended to be enforceable in law and lastly,

(6) the agreement must contemplate that the tribunal will make a decision upon a dispute which is already formulated at the time when a reference is made to the tribunal.

Sepco, a Chinese entity was awarded various coal based power projects in India, and Power Mech was its sub-contractor.

Later, Power Mech approached High Court seeking deposit of security for the amount awarded, by way of a section 9 Petition.

The application under Section 9 was decided first, and Sepco ordered to deposit 100% of the award amount. It was at the same hearing that the Single judge decided Sepco’s Section 36 application for stay of the award, and directed that upon deposit of the entire award amount, the award would be stayed. This was done by way of a single order.

The #SupremeCourtofIndia while deciding the appeal observed as follows:

In view of the same, the Supreme Court found no grounds to interfere with the Single Judge’s order and the appeal was dismissed.

In Ingram Micro India Private Limited v. Mohit Raghuram Hedge (Bombay High Court, decided on 30.08.2022), both parties were in the business of IT products & services.

Ingram had approached Court for appointment of an arbitrator, pursuant to an #arbitration agreement which was contained in the “Sales Terms and Conditions” as accepted by the respondent, which was available on Ingram’s website.

The Respondent on the other hand contended, that there was no valid arbitration clause between the parties and the same was vitiated by fraud.

In view of the above, #arbitrator was appointed.

The question was whether the ceiling of Rs. 30,00,000 fee applies to only the variable amount or to the total amount. 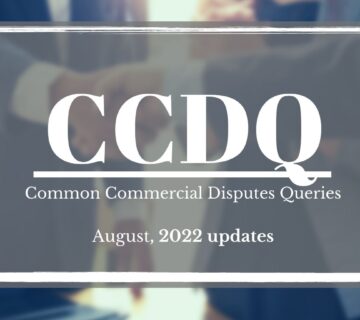